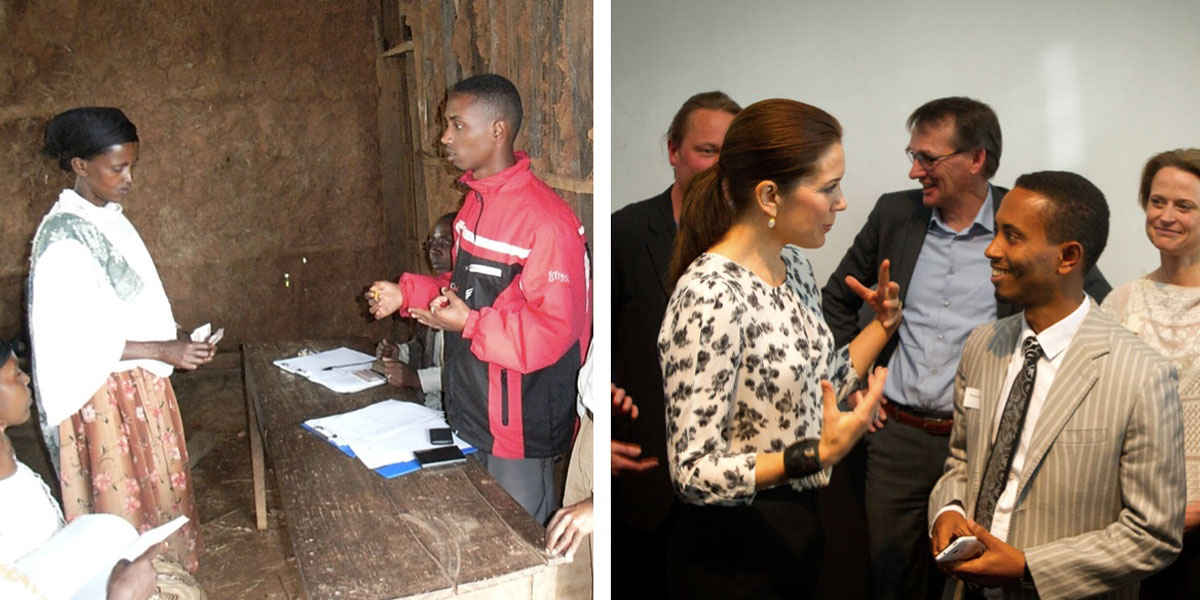 10 years ago, Feyisa Gudeta started working with Maternity Foundation as a community officer. Since then, he has been promoted to project manager, and he now oversees our maternal and newborn health program in West Wollega in Ethiopia.

To mark his 10-year anniversary, we interviewed Feyisa about his time with Maternity Foundation, his greatest work achievements, his most difficult experiences and what motives him in his daily work life.

How did you get involved with Maternity Foundation (then called Maternity Worldwide)?

“I graduated with a diploma in Accounting in 2004 and with a BA degree in September 2006. In 2006, I joined Gimbie Adventist Hospital as an accountant.

The former Maternity Worldwide Program Manager, Martha Bokosi, saw my T-shirt that says “Graduate of 2005/2006 Department of Community Development and Leadership”. She told me they needed a field coordinator for community work, and that they needed someone with my qualifications.

I already had a commitment with the hospital, but I told her that if the hospital director accepts the request and releases me from my contract, I would be happier to work for the community than to sit and work in the office. They had a discussion and agreed to allow me join the then Maternity Worldwide on April 17, 2007.”

What have been you most important tasks with Maternity Foundation?

“When I became project manager for the West Wollega program in 2014, I had a number of organizational challenges, including achieving our independence from our sister organization Maternity Worldwide. Going to all of the relevant government offices from district to zone to regional bureau to process the name change was very hectic. However, the transition was successful.

Working with the community is the most important part of my work life. This is where I have learned the most and developed the strongest passion for my work. I have seen the true value of the community – of their knowledge, their legacy and their habits. This has taught me to integrate our organizational goals and objectives with the community’s assets and knowledge.

When I started working as a community officer, I had to fundamentally change the attitude of the community, including the local government, about the perception of us as an NGO. Often, the misunderstanding was that NGOs simply hand out cash. I had to change this attitude.

Recently, one of my most important tasks has been to phase out our previous Integrated Maternal Health Project in a smooth and sustainable way, while leading and accompanying the evaluating team and phasing us into our new project, the Maternal and Newborn Health Project.”

How have you experienced Maternity Foundation’s growing impact in West Wollega during your 10 years with the organization?

“When I started working with Maternity Foundation, we didn’t have an independent operating license. We had to rent a car to run our activities and we depended on the Gimbie Adventist Hospital for our office administration. At the time, we worked in three districts with five staff members.

Now, we have 11 staff members, including three midwife trainers and two community health officers, and we are working in nine districts. We are considered a crucial organization for improving maternal and newborn child health in the region. For example, we are working as a regional and zonal technical working group.

We are saving the lives of thousands of mothers and newborn babies, we are improving the services provided to the mothers and newborns by health facilities and we are empowering the community with maternal health information. These are some of the many results I want to mention!”

Do you remember an episode that has made a special impact on you during your time with Maternity Foundation?

“There was a pregnant mother I met 27km away from Gimbie, where there was only a private clinic. I was there for community work. She came to the clinic with labor and heavy bleeding. Since they couldn’t stop her bleeding, the clinic referred her to hospital, but there was no transportation. They asked me to help her get to the hospital. Since she was bleeding heavily, I didn’t know what to do. I simply bought two plastic bags, broke them open and put it on the car seat and made the mother sit on the plastic sheet to protect the car seat from blood.

When she arrived in the hospital, I called the doctor and he reviewed her. Since she had lost lots of blood, she needed blood transfusion while managing her labour. There was no blood to give her, and the husband refused to give his own blood, because he said he would die if he gave his blood. So, I donated one unit of blood and another person who was there as a missionary donated another unit of blood.

Finally, she gave birth. When the baby was born, he was born with open spine (spina bifida). It was the first time I saw the case even though I had heard about it. I was shocked. The baby wanted to breastfeed, but the health workers refused. The doctor told the midwives to inform the family and let the baby starve to death. When I heard this, it was another shock for me. On top of that, the midwives were afraid to inform the mother. I cried a lot and finally I went and talked to the mother and convinced her to see her baby. When she saw her baby she wept and her heart was broken.

It impacted my life and my work with Maternity Foundation. It made me decide to work with Maternity Foundation my whole life. I learned that insufficient intake of folic acid—a common B vitamin—in the mother’s diet is a key factor in causing spina bifida and other neural tube defects. Ever since, I started fighting with health workers to provide proper antenatal care services and folic acid. Additionally, I promoted the importance of folic acid in the community and that it is their right to ask and get them during their antenatal care visits.”

What inspires you in your daily work with Maternity Foundation?

What are you most proud of in terms of what you and Maternity Foundation have accomplished in the past 10 years?

“Maternity Foundation is one of the very few organizations that the zone government trusts and they fight to maintain our work. We are the only organization working on mHealth in the zone and the Safe Delivery App has brought significant change in the skills and knowledge of health workers in the zone. The health workers that use the App are easily passing the professional competency exam given by the region and some are accepted as college instructors.

We have managed to help the service of the hospitals improve highly. The number of hospital deliveries has grown from 20 a month to 200 a month within few years. The number of health workers trained in birth attendance by Maternity Foundation is over 300.”

Photos: Feyisa Gudeta doing community work in West Wollega in 2007 and with our patron, HRH Crown Princess Mary, in 2015.