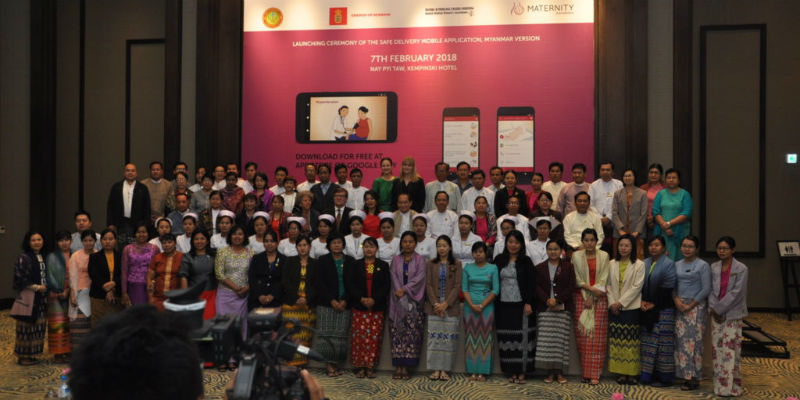 Nay Pyi Taw, February 2018 – The Safe Delivery App will soon be in the hands of midwives in Myanmar to help make childbirth safer for women across the country, even in the most remote areas. On February 7th the Safe Delivery App was launched at an event hosted by the Ministry of Health and Sports with support from the Embassy of Denmark in Myanmar.

The introduction and adaptation of the App into the Myanmar language version has been initiated and coordinated by the Danish Medical Women’s Association and Maternity Foundation in partnership with The Ministry of Health and Sports in Myanmar.

Conceptualized by the Denmark-based Maternity Foundation, Copenhagen University and the University of Southern Denmark, the Safe Delivery App is used in more than 40 low- and -middle countries across Africa and Southeast Asia and has reached 32.000 downloads. The global development and roll-out of the App is supported by MSD for Mothers and the Bill & Melinda Gates Foundation.

“I can tell that the Safe Delivery App is very user-friendly and that health workers will be well informed from it,” said Dr. Myint Htwe Union Minister, Ministry of Health and Sports at the launch. “I am convinced that with the launch of The Safe Delivery App we will be able to see some extent of reduction of maternal and neonatal mortality and morbidity in Myanmar in the years to come.”

The maternal mortality rate in Myanmar has been dropping steadily in recent years, from 453 per 100,000 live births in 1990 to 282 per 100,000 live births in 2014 according to the Myanmar census. However, Myanmar’s maternal mortality ratio is the second-highest in ASEAN, and 2,800 women die each year in Myanmar from causes related to pregnancy and childbirth. One in 10 deaths among women of reproductive age is a maternal death.

The introduction of the Safe Delivery App in Myanmar supports the Government of Myanmar’s efforts and strong commitment to accelerating progress towards improving the health status of the population, including strengthening health workers’ clinical competencies through active competency-based learning with a focus on job-related skills. Within the next fiscal year, the government will distribute tablets to all midwives across the country, and The Safe Delivery App will be installed on the tablet.

“Every maternal death is one death too many. The Safe Delivery App is produced in Denmark and now given to Myanmar. Using the mobile phone revolution the App can reach the most remote areas and have a real impact on the lives of women in Myanmar,” said Peter Lysholt Hansen, Danish Ambassador to Myanmar. The Danish Embassy on Myanmar supported today’s launch of the App.

The Safe Delivery App uses easy-to-understand animated instruction videos, action cards and drug lists. It’s both a training tool and an on-the-job reference resource that midwives and skilled birth attendants can be easily taught to handle normal and complicated deliveries, e.g. how to handle a life-threatening situation such as postpartum haemorrhage, the leading cause of maternal death in Myanmar.

“We want to get the app into the hands of as many skilled birth attendants as possible, especially in a digitally connected country like Myanmar,” explained Lise Knudsen, Deputy Director of Maternity Foundation, at the launch.

“The results we’ve seen elsewhere are remarkable. A clinical trial of the app in Ethiopia showed that it significantly increases a birth attendant’s ability to prevent complications during childbirth. For example, the ability to handle post-natal bleeding and to resuscitate a newborn more than doubled after just a year of using the app. This translates into so many more lives saved. It also empowers midwives and makes them even prouder of what they do.”

The mobile phone revolution in Myanmar – where smartphone penetration is now estimated at 80 % – offers a unique opportunity to deliver quality education through the mobile phone to even the most remote areas. 70% of the Myanmar population live in rural areas, so midwives play an important role in providing life-saving services to hard-to-reach populations.

Immediately following the launch, the Myanmar version of the App was introduced by Maternity Foundation’s Clinical Director, Agnete Nørrelund-Madsen to the first group of 45 participants: midwives and State and Regional Maternal and Reproductive Health doctors from across Myanmar. They will deploy the App in their states and regions going forward.

“Danish Medical Women’s Association has worked with the Maternal and Reproductive Health Division of Ministry of Health and Sports since 2012. We are delighted to have reached this stage and help make the Safe Delivery App widely used in Myanmar”, said Dr. April Moe, Danish Medical Women’s Association, the co-developers of the Myanmar version of the App.

As more countries deploy the Safe Delivery App, partners and collaborators will share best practices and lessons learnt, creating a global virtual community of App users. Maternity Foundation has made a commitment with UN’s Every Woman Every Child to reach a global number of 20.000 skilled birth attendants with the Safe Delivery App by end 2018. This would help ensure a safe birth for more than 2 million women.