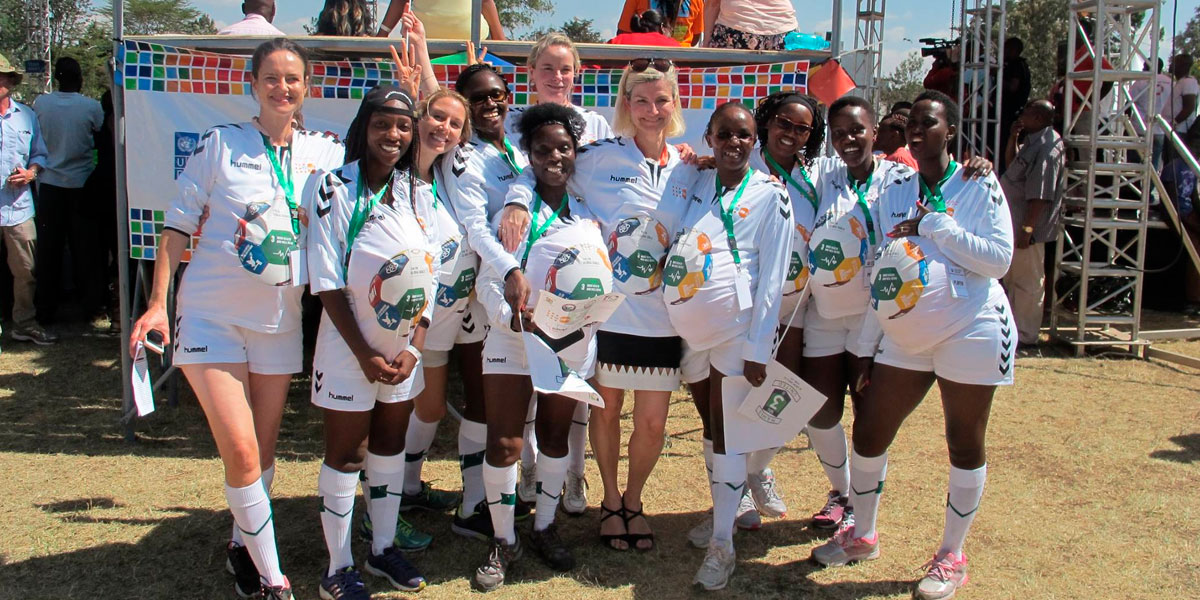 The Global Goals World Cup began in Copenhagen in 2016 as a tribute to the power of sport to change the world. The football matches are played by a different set of rules, awarding points for both scoring goals as well as working for the 17 Global Goals for Sustainable Development.

“The idea behind Global Goals World Cup is to harness the power of sport to excite and unite, and direct that power towards reaching the Global Goals. We need to cheer for the SDG frontrunners and activists as we would for our favorite football team, because it is the last minutes of overtime in the final for all of us, if we are to succeed with the Goals”, says GGWCup co-founder Rikke Rønholt Albertsen.

In partnership with the United Nations Population Fund (UNFPA) Maternity Foundation had formed team Mamas United to raise awareness about Sustainable Development Goal 3 and maternal health. Playing with fake baby bumps to highlight the health and rights of mothers everywhere, Maternity Foundation and UNFPA had convened midwives, doctors and nurses from Kenya’s Ministry of Health, Nursing Council of Kenya, Moi University, Midwives Association of Kenya, Amref, Kenyatta Hospital and Liverpool School of Tropical Medicine to play for our team.

Danish Minister for Development Cooperation Ulla Tørnæs (pictured above with team Mamas United) opened the tournament and said in her speech: ” The 17 goals have to be achieved globally – both here in Kenya and in my home country Denmark. I am so happy to see so many powerful women and girls on the field today. Let the best women win!”.

Sicily K. Kariuki, Kenya’s Cabinet Secretary for Public service, Youth and Gender Affairs was also present at the event. She stated: “It is through the SDGs that this country, this region and this globe is going to to make progress in development”. She then invited the crowd to sing Kenya’s national anthem.

Also speaking at the opening ceremony was Jonas Lindholm, Secretary General at Save the Children Denmark and Siddharth Chatterjee from UNDP. To conclude the opening ceremony, Danish drummer Ihan Hayder made the crowd dance with her Global Goals anthem.

“The Global Goals World Cup event was not only an amazing platform for advocating for SDG 3 and maternal health, it was also an opportunity to convene maternal health stakeholders in Kenya for an unique team building event. We will build on the relations made at this event to ensure that more skilled birth attendants in Kenya receive training through our Safe Delivery App in the years to come”, explains CEO of Maternity Foundation, Anna Frellsen.

Team Mamas United received massive interest at the tournament both among the crowd and in the media. And the team – to their own surprise! – actually won one of the three games played.

The young players from team Moving the Goalpost won the tournament and will be invited to play in the finals in New York this September. Partners for Global Goals World Cup in Kenya included the Danish Ministry of Foreign Affairs, UNDP, Safaricom, Save the Children and Eir Soccer. In 2017, events will take place in four global regions: Africa, Europe, North America and Middle East and North Africa, adding more regions of the world in 2018.