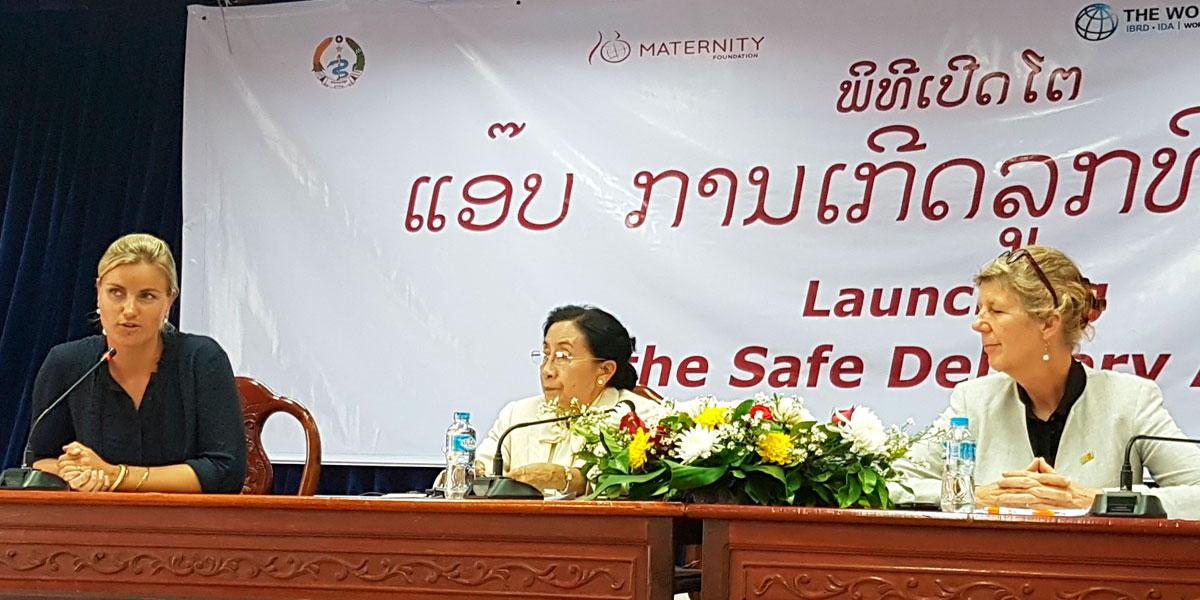 The Safe Delivery App, symbolizing the power of mobile technology, will soon be in the hands of midwives in Lao People’s Democratic Republic to help make childbirth safer for women across the country, even in the most remote areas.

Conceptualized by the Denmark-based Maternity Foundation, Copenhagen University and the University of Southern Denmark, the Safe Delivery App is currently being implemented in low- and middle-income countries in Africa and Asia.

Today’s launch of the Lao language version is being supported by the Lao PDR Ministry of Health, the United Nations Population Fund (UNFPA), the World Bank and the Maternity Foundation. The development and roll-out of the app are supported by MSD for Mothers and the Bill & Melinda Gates Foundation.

“As we strengthen our public health infrastructure, we need a range of tools including mobile technology to strengthen technical capacity and service delivery,” noted by Associate Professor Dr. Bounkong Syhavong, Minister of Health. “The Safe Delivery App has is a logical addition to our national midwifery programme. Quite simply, midwives save lives, and this will help them safeguard even more women before, during and after childbirth.”

Now the challenge is in reaching the target of 180 per 100,000 live births, in order for Lao PDR to graduate from Least Developed Country status by 2020, and strengthen its ability to fulfil the 2030 Sustainable Development Agenda whose pledge is to leave no one behind.

“Even one woman dying needlessly during childbirth is one too many,” said Frederika Meijer, UNFPA Representative in Lao PDR.  “Maternal mortality cannot be seen in isolation, however. It’s tied to a range of issues and challenges, including access to sexual and reproductive health for women and girls in particular, grounded in gender equality and rights — all of these cross-cutting issues under the Sustainable Development Goals that support the 2030 Agenda. The Safe Delivery App is just one of the ways in which UNFPA and partners can contribute to the Government’s efforts to secure the health and well-being of citizens.”

The Safe Delivery App uses easy-to-understand animated instruction videos, action cards and drug lists. It’s both a training tool and an on-the-job reference resource that midwives and skilled birth attendants can be easily taught to use. And in countries like Lao PDR, where access to mobile technology has leapfrogged over traditional computer use and Internet access, particularly in rural areas, the Safe Delivery App has been shown to have far greater impact than traditional online modules.

“We want to get the app into the hands of as many skilled birth attendants as possible, especially in a ‘mobile-first’ country like Laos,” explained Anna Frellsen, Chief Executive Officer of the Maternity Foundation.

“The results we’ve seen elsewhere are remarkable. A clinical trial of the app in Ethiopia showed that it significantly increases a birth attendant’s ability to prevent childbirth complications. For example, the ability to handle post-natal bleeding and to resuscitate a newborn more than doubled after just a year of using the app. This translates into so many more lives saved. It also empowers midwives and makes them even prouder of what they do, individually and collectively.”

The Safe Delivery App is a relatively modest investment in financial terms. The app is customized in such a way that its socio-culturally sensitive illustrations and modules can be applied to several countries across a region, thereby helping reduce the eventual production cost significantly for each country where it’s adopted.

The Lao version of the app will be introduced in 9 midwifery schools over a 2017-2018-year period, with the aim of reaching 1,000 midwifery students– many of whom will be deployed to rural areas where traditionally midwifery and other essential maternal and neonatal health services have been thin on the ground.

“As the Government of Lao PDR works to reach the last mile with lifesaving public health interventions, the return on investment of the Safe Delivery App is potentially huge in terms of health costs saved by ensuring safer pregnancy and childbirth,” said Sally Burningham, World Bank Country Manager for Lao PDR.

“No woman should die giving life,” concluded the Maternity Foundation’s Anna Frellsen. “The Safe Delivery App helps celebrate life, and with it our shared humanity.”