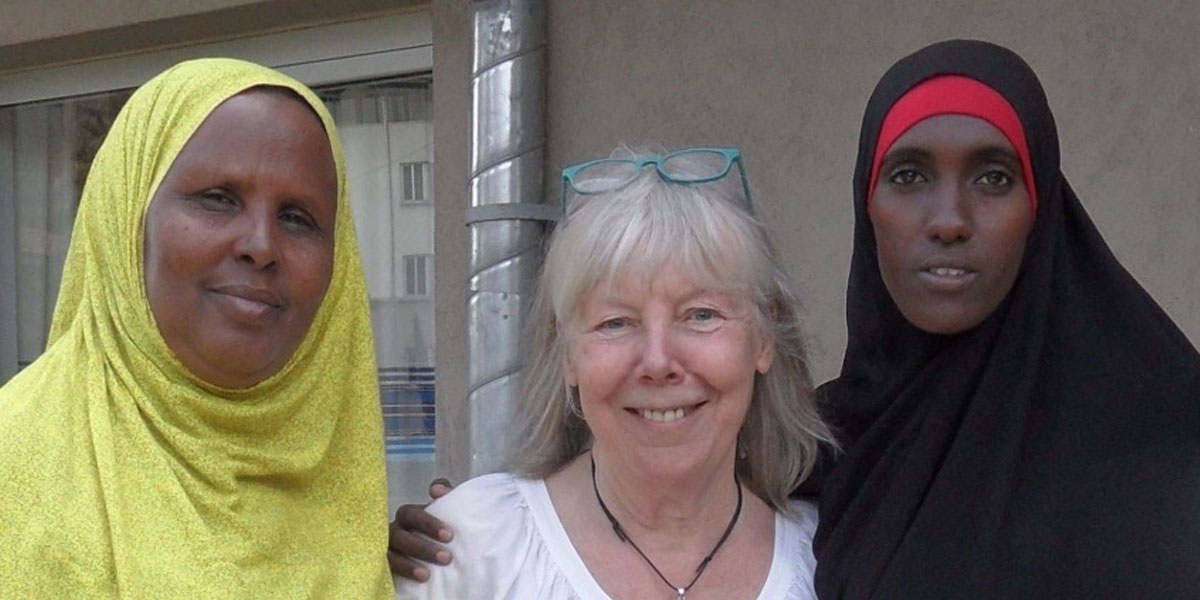 She has worked as a midwife and teacher all over the world – from Greenland to Eritrea – and has welcomed more than 3.000 babies. Meet Maternity Foundation’s clinical advisor Susanne Houd.

For 48 years, Susanne Houd has been a frontrunner in developing the field of midwifery. She has worked both in theoretical settings – heading one of the 3 midwifery schools in Denmark, working as a consultant at WHO’s European office – and as a hands-on midwife in Denmark, New Zealand, Canada, Greenland and Eritrea, both in hospitals and at home births.

An advocate for midwifery

“I was actually first studying law, because that was what my father wanted me to do. One day, I suddenly had the epiphany that I wanted to become a midwife. I knew nothing about midwifery at that time”, recalls Susanne Houd, who graduated in 1967. Her final exam took place one day before she gave birth to her first-born son.

Susanne Houd’s first job was at Gentofte Amtssygehus near Copenhagen, where only women who encountered problems during pregnancy gave birth. Quickly, Susanne Houd built an expertise in handling birth complications.

Throughout her career, Susanne Houd’s mission has been to help and empower women to give birth on their own terms. In the 1970s – while she was chief midwife in Nykøbing Falster – Susanne initiated a project on home births.

“I clearly remember one Sunday being called to a homebirth. The mother had four children and she refused to go to the hospital. I witnessed how she delivered her fifth baby standing up and almost entirely by herself. It changed my world”, she explains.

In 1980, she began working for the World Health Organization, WHO, at the Maternal and Child Health section of their European office. Here, she was part of the group that developed WHO’s guidelines for the use of technology in the perinatal field, e.g. the pregnancy, the birth and after the child is born. In addition, she worked to give authority to the field of midwifery, which was often not considered a profession in itself, especially in the eastern European countries.

International adventures
Susanne Houd has an adventurous spirit, and she has never hesitated when asked to help communities in hard-to-reach parts of the world to establish local birthing facilities.

In 1998 she went to Nunavik in the northern part of Quebec in Canada, where only 10.000 people live – most of them are Inuits. Since the mid-sixties, the women of Nunavik had to fly to Montreal or Quebec City to give birth.

“It was not a good experience for women to give birth far away from their families and without being able to speak the language. I opened a birth clinic at the local hospital to allow women to give birth in their local community, and made sure to educate local midwives who spoke Inuit. Ten days after my arrival, we had the first two births at the new clinic. We put lights in the window to celebrate the births with the local town”.

In 2003, Susanne Houd visited Greenland to work during the summer holiday. She instantly knew that she had to return to Greenland. At the same time, she felt that after 5 years the burden of administrative tasks as head of the midwifery education in Copenhagen did not leave room enough for her professional development. She quit her position and became district midwife for eastern Greenland for the next ten years.

“I guess I have somewhat of a five-year-cycle for when I need to try something new”, she readily admits.

Susanne Houd was based in Tasiilaq in southeastern Greenland, a city of about 2000 inhabitants. From here, she covered a coastline of 2.600 kilometres as the only midwife. She worked closely with three other health workers specialised in pregnancy and birth. The doctors were highly competent, but without obstetrical expertise.

“The women in Greenland are stoic in the way they give birth. I think it is because life is so hard in Greenland. Everybody knows someone who has committed suicide or gone through the ice,” says Susanne Houd, who still owns a house in Greenland.

Giving birth in Eritrea
While Susanne Houd headed the program for continuous education of midwives in the 1990s in Aarhus, she was contacted by an organization that wanted her to lead a DANIDA-sponsored program in Eritrea to educate local birth attendants.

“I had never been to Africa, but I immediately said yes”, says Susanne Houd.

“I will never forget my first visit to a birth clinic in Eritrea. The hospital only had one big room for all of the birthing women. They lay on mattresses, without any sheets, in their own clothes, and everything was really dirty. As I step into the labour room, I see a women giving birth. She is placed flatly on her back and she is really struggling. The midwives seem not to be paying much attention to her. Spontaneously, I walk up to the woman, I hold her to comfort her and lift her up a little. The midwives think that my behaviour is bizarre. But the lack of compassion was just terrible. Being kind to the birthing mothers has no cost.”

Susanne Houd visited Eritrea every six months for 8 years to hold courses for a small group of midwives. Another major problem she encountered in Eritrea was circumcised women.

“I learned how the local midwife in the village would cut open the women to allow them to give birth. But she was not able to sew them up afterwards, so the women’s legs were tied together for seven days in an attempt to heal the wounds. This is how many of the women die.”

A hands-on teacher
Susanne Houd sees a number of similarities between giving birth in Canada, Greenland, Eritrea and Ethiopia:

“Transportation is difficult and there is a lack of education for birth personnel. Also, the birthing women often share a feeling of isolation and loneliness. What these settings require from me is both to be sensitive about the cultural and geographical environment, and not to come as an outsider with a number of pre-conceived ideas about how things should be done. I am not in charge of the birth, but I support the women and those who are responsible”

Together with program coordinator, Sara Thordal Jensen from Maternity Foundation Susanne Houd travelled to Ethiopia to train a task-force of midwives and community workers in using the newly developed training materials.

“The atmosphere in the class room is ecstatic when Susanne teaches,” recalls Sara Thordal. “She really understands how to empower the students and create a positive learning environment. She discards the traditional class-room training and instead makes sure that techniques are taught through practical hands-on training.”

The task-force is now training other midwives across Ethiopia in the BEmONC course with the addendum from Maternity Foundation made by Susanne Houd.

At the age of 73, Susanne has no plans to retire. She regularly visits Italy, where she holds courses for midwives and doctors in how to manage birth without an excessive use of medical intervention. Also, she is working on an Italian book on home births.

“I love the field of midwifery, and I learn something new all the time. Sometimes I feel like I am just getting started”.